KADUNA, North-West, Nigeria – The New Nigerian Newspapers Ltd has been thrown into mourning over the demise of its Managing Director, Alhaji Tukur Abdulrahman.

A statement signed by the company’s Online Editor, Jacob Dickson informed that the news of his demise was announced on Thursday night, staff of the company have been in shock.

The Production Manager of the company, Alhaji Yusuf Kontagora said that the news was devastating.

“I am still in shock after receiving the sad news. We are still confused as to the next line of action,” he said.

In his own reaction, the Online Editor, Mr. Dickson described the late MD as a kind hearted leader, who would be missed dearly by all staff of the organisation.

“He was so kind hearted and loved by all staff of the organisation. He was more than a boss, a close friend who always has a listening ear,” he added.

Chairman, New Nigerian Chapel of the Nigeria Union of Journalists (NUJ), Mr. Benedict Sunday, described the loss as a colossal one, which will not only shake the organization, but journalism as a whole in Nigeria.

Family sources informed that Mr Abdulrahman died at H2 Speciality Clinic in Asokoro, Abuja on Thursday night after spending a few days in the hospital.

The late Abdulrahman was an indigene of Daura, Katsina State. He did his secondary education at Government College Kaduna, before proceeding to Bayero University Kano for his tertiary education.

He edited Gaskiya Ta Fi Kwabo, a vernacular publication of the New Nigerian, before his appointment as the title editor.

According to family sources, the late Abdulrahman would be buried in his home town Daura after Juma’a prayers in Daura at Waziri’s Daura House by 4pm on Friday, 18, 2018.

He is survived by a wife and five children. 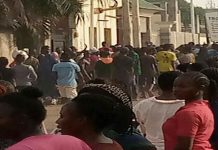